Tannor Reed returns in a big way being shared by best buds, Brock Banks & Sharok, AKA "The "Brock-Sharok Tag-Team"! Tannor is excited to be in the hands of two considerate tops and let them do whatever they want, while Brock & Sharok are just as happy to make sure they ALL have fun. And so, after much making out and teasing Tannor’s hole, they go for it and before long Tannor goes down on Brock while getting his hole rimmed and opened up by Sharok.

Brock wants his turn and Sharok turns Tannor around to switch places with Brock. In the middle of getting good head Sharok is drawn back to join Brock in feasting on Tannor’s hole and his dominant side heats up as face fucks Tannor. He again turns Tannor and pounds his hole while Brock makes out with him. In time Brock & Sharok join forces, holding Tannor upside down for him to suck Brock while Sharok eats out his ass. Then he holds Tannor by the arms while Brock drills him in a mid-air missionary position.

They soon bring flexible Tannor to the sofa to flip his legs back so Brock can drill his hole in a reverse pile-driver. Tannor relishes being used and soon he’s flipped on his back for more of Brock’s cock. As he’s fucked hard Tannor sucks on Sharok who in turn deep kisses him passionately to enhance the pleasure But Sharok’s dominant nature returns as starts to plow Tannor. 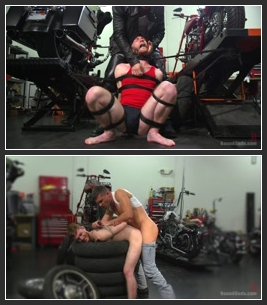 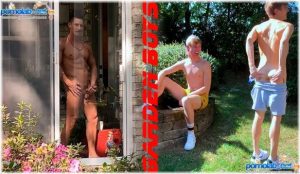